12:41, 11.10.2018
ajk/is/rg;   nationalchefoftheyear.co.uk, Poland in English
Major success of Polish chef in UK Polish chef Kuba Winkowski, the head chef at The Feathered Nest Inn in Nether Westcote, Oxfordshire, won the title of The National Chef of the Year in the UK.

Polish chef Kuba Winkowski, the head chef at The Feathered Nest Inn in Nether Westcote, Oxfordshire, won the title of The National Chef of the Year in the UK. 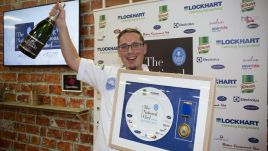 Podziel się:   Więcej
The Pole was rated by 21 best chefs in the UK, which were overseen by Gary Jones, executive chef from Belmond Le Manoir aux Quat'Saisons in Great Milton, Oxfordshire, which holds two Michelin stars. The stars – a total of three are given to the very top restaurants in the world – are the most desired distinctions in the culinary world.

The runner-up in the contest was George Blogg, head chef at Gravetye Manor in East Grinstead, West Sussex and in third place was Derek Johnstone, head chef at Borthwick Castle in North Middleton, Northumberland.

“I am obviously super happy, but for me the feeling of relief is immense. Coming back for the second time really helped because this time I knew more about the venue and the whole competition experience. This meant I only needed to think about the cooking,” Mr Winkowski said after the announcement of his victory.

“Winning is not just about me as I have an amazing team around me and it takes dedication from us all, including my commis chef, who has worked with me for hours on end over the last few weeks,” he added.

This was his second try in The National Chef of the Year contest. “Kuba was frustrated after last year, not because he did not win, but because he wanted to be better. He has gone away and thought about what he could achieve with real determination, ambition and competitive spirit. He is sharper and fitter than he has ever been, so he could be the best chef possible and he absolutely deserved to win today,” star chef Gary Jones said.

The National Chef of the Year contest was established in 1972. This is one of the most prestigious and respected culinary contests in the UK. It is organised by The Craft Guild of Chefs, the largest UK chefs’ association.
początek strony ^