14:14, 22.08.2018
jmr/rg;   TVP.INFO, POLAND IN ENGLISH
Opposition leaders want expelled NGO head back in EU On Tuesday, a group of political leaders, activists and scholars, including Poland’s ex-president Lech Wałęsa, published a call for bringing the expelled Ukrainian NGO head Lyudmyla Kozlovska into the EU after her expulsion from the Schengen zone earlier this month.

On Tuesday, a group of political leaders, activists and scholars, including Poland’s ex-president Lech Wałęsa, published a call for bringing the expelled Ukrainian NGO head Lyudmyla Kozlovska into the EU after her expulsion from the Schengen zone earlier this month. 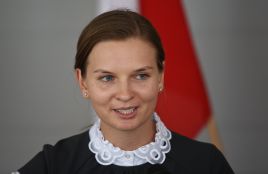 Podziel się:   Więcej
The petition, published on the change.org website, alleges that the decision to blacklist Ms Kozlovska was a sign of “dismantling” of the rule of law and democracy, calling the expulsion a “scandalous abuse of the Schengen Agreement by the Polish authorities.” They also suggest that the expelled NGO head should be given citizenship of another EU Member State so that she can “return home.”
’Political persecution’

Among the signatories of the petition are many Polish opposition leaders and activists. These include former president and Nobel Peace Prize winner Lech Wałęsa, European Commissioner for Internal Market Elżbieta Bieńkowska, as well as a number of MEPs and MPs representing Poland’s opposition parties Civic Platform (PO). Politicians who signed the petition also come from Poland’s the Modern Party, joined by well-known liberal media figures known for their outspoken criticism of the current conservative Law and Justice (PiS) government.

In its decision to deport Ms Kozlovska to Ukraine, Poland’s Internal Security Agency stated that there were “serious doubts regarding the funding of the Open Dialog Foundation Ms Kozlovska is running which may produce further legal effects,” refusing to disclose further details concerning the investigation to the public.

The Open Dialog Foundation and one of its board member, Ms Kozlovska’s husband Bartosz Kramek, first became known for their active support of the Ukrainian democratic protests in 2013 and 2014. Later on, however, the Foundation became involved with domestic politics in Poland, with Mr Kramek famously publishing a manifesto calling for a “government shutdown,” which would be achieved by organizing various strikes, civil disobedience events as well as by encouraging the EU to impose sanctions against Polish government officials.

This open involvement in anti-government protests has now led both Ms Kozlovska and her supporters to declare the expulsion from the EU an act of political persecution. However, many reports published in the press in recent months suggested that the real issue – later apparently confirmed by the official statement of the Polish Internal Security Agency – has been the lingering doubts as to the Foundation’s sources of financing.
The Russian connection

According to an independent investigative writer and blogger, the foundation’s main donors had links with the Russian arms industry, including companies blacklisted over Russia’s annexation of Crimea. A prominent pro-government Polish website repeatedly stated that the Foundation’s aim may have been to overthrow Poland’s government and that it may have been serving foreign interests.

The widely discussed “government shutdown” manifesto came out at a time when Poland’s opposition staged a lengthy sit-in at the Polish parliament, initially in protest against the plan to change regulations concerning the presence of the media inside parliament building. Some opposition activists were hoping that the protest would escalate into a series of nationwide demonstrations.

Before the protests ultimately died down in early 2017, the former editor-in-chief of Forbes Poland and current POLITICO contributing editor, Michał Broniatowski, released a set of suggestions for the opposition in which he encouraged it to follow the pattern set by the 2013 Euromaidan protests in Ukraine, which led to a revolution the following year.

Since the Ukrainian revolution escalated into violent clashes that claimed hundreds of lives, Mr Broniatowski’s plan was widely criticized as incitement to violence. Mr Broniatowski is now listed as one of the signatories of the petition for allowing Ms Kozlovska back into the EU.
początek strony ^